I figured my last NOLA post was getting a little long but there was still one more day - and my only self stitched day.  Seriously, clearly I wasn't thinking of that angle when I packed.  We didn't take pictures and I've already told those stories, this was the last tourist day.

Sunday was about catching the last couple of sights we missed - and mostly of the French Quarter walking around variety.  We had a lovely breakfast at the Rib Room with the same waiter as on the Natchez.  Bill is fantastic, gave us a tour of the private dining rooms below. 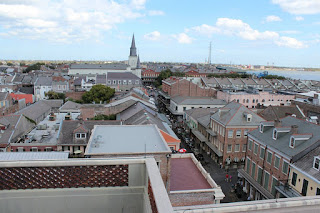 Then it was off to walk our breakfast off.  Mr. Lina had read about cornstalk fence in our little guide book. 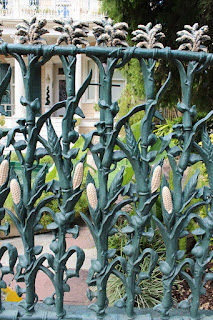 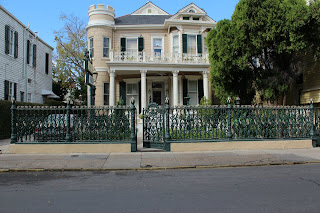 Imagine having to take that yellow can of paint around to paint the corn?  Close up it's pretty clear there are many layers of paint to that fence.  It's certainly original.

Bill gave us directions to find Francis Ford Coppala's house, so we HAD to walk by to see.  Mr. Lina is a movie fanatic, so he was pretty jazzed to see it even if nothing was going on.  Apparently he rents it out when he's not using it, aimed more for housing cast & crew.  It's a bit out of our budget.  ;)


Our meandering took us to Jean Lafite's for a drink and Armstrong Park on our way to Treme.  We loved the HBO series, although we still have to watch season 2.  For me, it really grounded what I was seeing, thinking of where Davis or Antoine lived or played...  When we got to Treme, there was a parade.  Good timing. 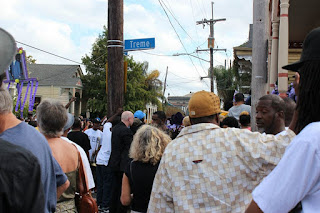 Treme has a mix of houses that are well cared for and fixed up and some that still have a lot of damage I can only assume is from Katrina. 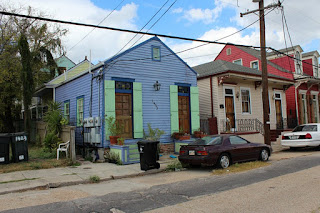 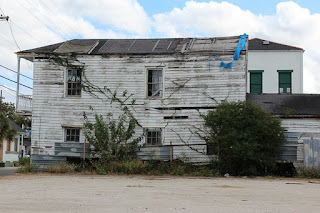 Then to the Mint.  The mint also hosts a display on jazz and Preservation Hall in particular.  It's a bit odd to share a building, but well worth a visit.  Actually, I could have listened to the guy at the desk for a whole lot longer.  He lived through Katrina and while we didn't ask about it, he was happy to tell his perspective.  He had been in the navy, didn't know how to swim, but seeing the world, he knew they were poor.  Prior to Katrina, he said NOLA was a place you could be poor and not know it.  After...  The illusion was gone.  He has 3 fears, high water (he can't swim), snakes, and dead bodies.  He saw all three with Katrina and spent 6 days in the Superdome because he didn't have the resources to leave.  Sadly, other people arrived at that point and so he went back to doing his job and we went off to listen to music and read about Preservation Hall.

For our last dinner, we went back to the Crescent City Brew House to have crazy huge oysters.  I wore my black polka dot Lekala 5432 out for dinner and got an unsolicitation.  It was quite lovely and we took pictures of the oysters, but not of each other.  We really should ask staff to take pictures of us while on vacation.

Now that I look at the pictures, you only have one of me wearing Sencha and you don't really see much.  It was a warm day, but I was wearing a sweater most of the time. 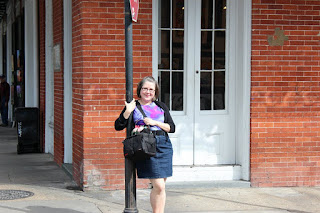 Sadly, one of my covered buttons came uncovered.  It's not pretty having a silver button in between all the pretty purple ones.  I remember thinking after doing them I should have put a little glue down just to be sure they stay put.  Lesson learned for next time.

I need to get Mr. Lina to do a little photo shoot for me so I can post my new Sorbetto's.  I have been wearing them a lot, for being more summery, I'm actually making them work into my winter wardrobe.  I'm tempted to make a third, but looking through my fabric stash, nothing really says Sorbetto.  Ah well.  Not a lot of time to sew in the next couple of days anyhow.  My brother and SIL are coming for dinner Friday, Kev Corbett (recent winner of Nova Scotia Musician of the Year and veteran of my basement) is playing in Oakville tonight so I'd like to support him.  Saturday we're off to the Christmas Tree Hunt...  Maybe Sunday I'll sew.  Nope, D&D.  Sigh.  One day I will get back in that room.
Posted by Seraphinalina at 13:11