Every popular comic book character, no matter how strange in origin, is popular because there is something that truly resonates with the every day.  Sure it's cool that Spider Man has some swingin' wall crawlin' powers or Superman seems to be invincible.  It's not that kids don't want to imagine flying through the air, but the more time I've spent around people who read comics, the more I understand that's just like icing below a really good cake.  Spider Man is young, a teen who isn't like his peer group and doesn't always feels like he belongs.  He's struggling to make ends meet, be a good nephew and live up to the responsibility his uncle placed on his shoulders.  I think we can all relate to that and that's why his character endures.

You know who I relate to at the moment?  The Hulk.  I'd say She-Hulk but I really don't know much about her. 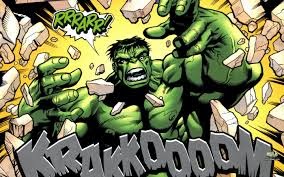 Bruce Banner is a pretty smart, straight laced kind of guy who has this crazy, instinctive Hulk on the inside.  The Hulk runs wild, like a tornado wrecking what gets in his way.  The 2003 Ang Lee Hulk movie sucked (IMO) but the CG Hulk had this great look in his eyes when bounding across the desert - he was happy and thrilled to be in the moment, away from whatever was making him angry and the pressures Bruce Banner was feeling pre-hulking out.

Well, I'm feeling my own inner hulk lately.  The feeling that breaking something (anything) might feel... freeing.  That not thinking things through but just going with your wildest instincts might be a good idea.

But we all know that breaking a glass isn't fun, there will be regret that comes with the clean up.  It won't actually change anything that needs changing (no matter how hideous the broken item was).  Stomping my feet won't change anything.

And yet the rage is there and it needs to leave.

On the weekend, Mr. Lina was hosting an "awesome" movie night (see the sarcasm there?).  I was happy with that, guys come over, I'll occasionally watch a movie, bring food down, but it's really not my thing.  My brother Scot was coming, he asked if he and his fiance could come for dinner.  I thought this was a good thing, I could hear about their trip to Venezuela, offer my congratulations on their engagement...  all good.  Then my friend emailed to ask if she and her daughter (my favourite 4 year old) could come and hang out with me upstairs while the guys watched the movie.  Again, I was okay with that too.

Both of them are pregnant and due in April.  No matter how much I try not to think about it, they are and getting to the point where it's hard to ignore in person.

I couldn't decide what to make for dinner.  I really couldn't.  I'd go to the freezer, pull out some meat, change my mind, put it back, went to the store when I decided on beef stew and had no vegetables that were really suited to stew only to come home with pork chops.  And then I couldn't decide what to do with them.  It was indecision to the point of paralysis 20 minutes before they arrived.  Adding to that, the main floor of the house was a mess - the dining room table full of stuff, the living room full of things that a 4 year old shouldn't get into, the guest room bed was stripped and covered with clean laundry if she needed to go to bed.

I haven't felt that... frozen, in a very long time.  It took me by surprise.

Looking back, I shouldn't be surprised.  I've felt my breath change reading an email about a family gathering planned for February so more of the extended family could meet my brother's fiance.  I didn't even forward the email to Mr. Lina and it came up at dinner with the hosts of the gathering.  My brother asked about dates in March for a baby shower and I was upfront that I won't go.  Just thinking about maybe going made my chest feel heavy.  And January is a tough time.  I've had lots of losses, October might have the most in quantity, but the January pregnancy was the hardest.  I thought I was doing a few mental self checks about that and felt okay.  Maybe I wasn't really checking all that hard.

In the end, I survived Saturday.  I'm sure my eyes were still red when I answered the door and Mr. Lina stepped up to start dinner and once he did I could step in and finish it.  It tasted fine and they had so many stories to tell at dinner I could sit back and listen and settle.  I wasn't great company, but I wasn't throwing glasses at the wall either (although I did break a Pyrex lasagna dish, but through carelessness not throwing).  My friend was over tired because her daughter had her up in the night, so I don't think either of us were great company really.

Life does go on.  Now to find an outlet for my inner Hulk to spare my breakables...

Posted by Seraphinalina at 15:21 8 comments:

You know I have started and abandoned a few blog posts over the past couple of weeks.  I am rarely at a loss of things to say, but I seem to be in a quiet phase.  Or when I'm not quiet, when I reread my writing, well... it's not so good.  So I think I'll come back to a post and then I don't or I've moved on in mood...  It's strange.


It is time for me to pack up and head to bowling so I'm going to call it quits there.  I do hope the holidays were good for all of you.  I know it was a much needed break for me.
Posted by Seraphinalina at 16:58 7 comments: