When I packed up my sewing room, I was surprised to see really how many patterns I have.  Now I am a tracer so some of the patterns take up more space than you'd think with the additional paper, but they were all in one very full medium sized box clearly marked "Patterns".

Striking while the iron was hot (and the fabric was new), I wanted to sew one of the two fabrics I had planned for a skirt.  Easy enough project as I have skirt patterns that fit me already, a good project to get back into the swing of things with.

I gave up.  I have a black skirt that is short without being indecent, perfect for a date night and it's a knit.  Exactly what I wanted for the "snake skin" knit, but now with the additional work of copying the existing skirt and figuring out the construction.  So a little more time than taking the pencil skirt pattern I already love but at this rate, faster than finding the box of patterns.

The skirt I was cloning is done in 4 pieces, a curved 2" waist band in two pieces (4 if you include the facing), and a side zip.  The front and back centre seams are straight so I didn't bother, I cut on the fold.  I did not notice that the front and back waist bands are not identical so my first waist band was too short by maybe 3" because I only traced the short front band.  Oops.  My fault for not walking the seams.  I did have enough fabric to cut a second waist band so it wasn't the end of the world.  I might turn the short waist band into a belt with the hardware  and a little elastic making up for the gap.

At which point I found my box of patterns.  On the shelf where it should be.  Closest to the door, just below eye level, so not even obscured by the desk or too high/low to see properly.  The one side of the box that did not say patterns was facing out.

On the plus side, outside of hemming and fixing a little tugging on the side zipper, I have a new skirt and a pattern for a knit skirt that fits quite well if I do say so myself.  Pictures to come when it's hemmed and the zipper is fixed.
Posted by Seraphinalina at 10:07 5 comments:

Where on earth did January go?  I swear I blinked and weeks had passed.

On the sewing front, I'm getting there.  I finally found my iron last week but I still haven't found my large self healing mat.  The little one, but not the big one.  The little mat is maybe helpful for a bra and that's about it and I'm not quite organized enough for making a bra.

I am, however, vaguely organized to sew a rectangle.  Large rectangles.  Like curtains. 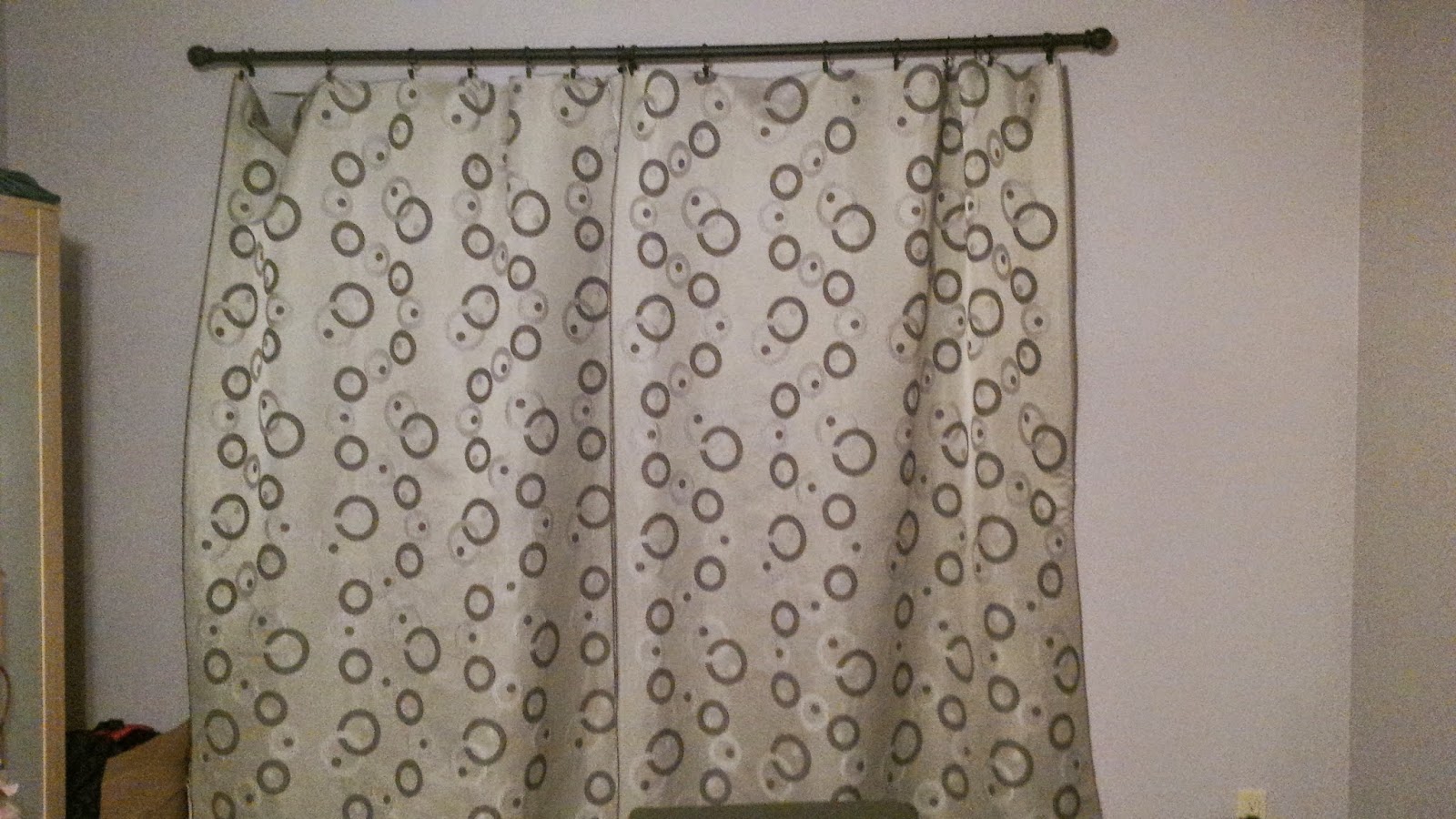 They aren't quite finished.  I wasn't sure how well they would block out the sun and they were needed sooner rather than later because the blinds are useless.  Completely useless.  Not only are they ineffective at blocking sun, they provide no privacy.  Something I realized coming home from bowling when Mr. Lina had the light on in the bedroom and I could see everything from the street.  Not just the shape of my furniture, but the details too.  No wonder the neighbours are so friendly.  I put up a sheet that night, bought this fabric on the weekend, cut and turned the edges and we hung them up.  As it turns out, I do need a fairly heavy lining to block out the sun so I'm glad I waited rather than cheaping out assuming the fabric was heavy enough.

Mr. Lina also has me sewing rectangles for a green screen.  I'm less enthused by that as the fabric with the right shade of green is also rubber backed and freakishly heavy.  It looks like it was sewn by drunk monkeys because it's hard to pull the fabric in 9' panels evenly.  I refuse to sew more until he supports the fabric on the side.  It's just embarrassing how crooked it is.

Things are moving pretty quickly on the home study/adoption front.  Our adoption worker is such a good fit for us.  We share similar interests in folk music, he plays guitar, he's really made Mr. Lina feel comfortable.  We've had one meet & greet and our first visit (of 4-5) for the home study.  It's pretty intense, there aren't many skeletons left in our closets.  An hour and a half of talking (each, separately) about our childhood.  And it's not just what I say but how I say it.  Like he commented on how I talk about my dad, it's like I'm defending him when no one is attacking him.  I didn't realize I felt that way, like I needed to justify everything.  So strange.  That interview rattled around my head for a few days.  Still does I suppose.  We were scheduled to have our second meeting today but he is sick, so it's going to be next week.

Oh and we went to Montreal for a wedding.  Who gets married in Montreal in January when most of your family are in Manitoba?  Not the best time of year for travelling.  BUT, it was in the Plateau area, I bought 3 pieces of fabric without it being a hassle at all, and I'm so happy for the couple.  They really are well suited and just crazy enough for the other.  It was a wonderfully casual wedding with cocktail dresses for a dress code.
The fabric on the left is black and the light is accentuating the snake skin print, it s quite subtle in person (being black on black).  It's a knit, fairly stable but my plan is a skirt so just enough stretch for movement and comfort.  Actually all three have stretch, now that I think about it.  I didn't notice quite how much stretch was in the top right (and it is grey, not purple) "cloud" fabric until later because it's one directional.  I want to make it into a pencil skirt.  I'm doing more formal client meetings and I feel most professional in a skirt so I'd like to add some to my wardrobe.  Last is the cable knit sweater.  It's fairly heavy, black on the back.  I was thinking a snug sweater (I think it's thick enough to smooth over bumps) maybe like Renfrew, but it was the last 2m on the bolt and I took it all.  So maybe a dress now?  Snug and fairly short maybe, something that could be worn with opaque tights or leggings/skinny jeans.
Posted by Seraphinalina at 09:51 2 comments: