What a month it has been.  I'm honestly not too sure where to start and I think that has me slow to post since returning from Germany.  I want to write about:
It's really more than one post so we'll see where this goes and pick up the rest at a later date.  We're still uploading pictures from Germany and it really deserves it's own post.

When I pack for vacation, me-made clothing get preferential treatment.  I'd rather look at pictures and see things that are me-made.  But looking at these pictures, there aren't many me-made to show.  My me-made bathing suit was my favourite but Mr. Lina (wisely) did not take pictures of me wearing it.  I have 3 pieces of fabric to make another, I should get on that.

I am (clearly) fair skinned and covered with moles.  I'm the girl wearing a hat, a white sweater and SPF 60 in the summer.  It's just not worth the risk of burning and skin cancer.  I'd like to keep what skin I have.  I own MANY summer (and winter) hats.  And guess what I forgot to pack?

Fortunately Mr. Lina packed both this less than fashionable hat and a ball cap and that hat somewhat fits my rather sizable head.  The shirt is Simplicity 4218, view B.  I made this before I read blogs and heard about full bust adjustments (not something my mom had to worry about when she sewed for herself), so it ended up absolutely huge.  HUGE.  In theory, the back has a tie.  In my version, I had to take inches in off the back so it would stay on my shoulders.  This means the ties are actually poking through a hole I left in the back the shirt and not tied to anything.  Based on my circles on the pattern envelope, I think I made a size 20, I really should have made 16 or even a 12/14 because of the crazy ease and stretchy fabric.  Whatever, I love the fabric, I get compliments when I wear it but it is showing signs of wear.  The knit is pilling at the side bust and the neck has stretched out.  There is a little bit of lace from my bra sticking out in this picture (and the crazy hair is thanks to the hat and the wind).
I bought a hat about 20 minutes after this picture was taken so you aren't subjected to the green hat again.  Let's move onto what I need to clone (or find a pattern to replicate).  This is a RTW shirt I inherited from my SIL. 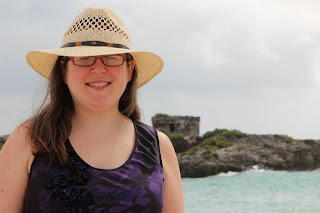 ﻿﻿
﻿﻿﻿
It's just a long tank, but there is a ruffle sewn from the bust up to the shoulder on one side.  This makes it a little difficult to layer under a cardi, but it looks much nicer than your typical tank.  It's polyester so it's not going to wrinkle and it does dry fast.  I should make something similar because I find it very easy to travel with.  Maybe a tweak to the Sorbetto pattern.


I bought this top at RCSS, a grocery store, it's "Joe Fresh" brand and I've found it great when it's hot but I want my shoulders covered.  We weren't suppose to wear sunscreen on the Jungle Maya tour because it will cloud the water in the caves (cenotes) we were snorkeling in, this was perfect for cool sun coverage.  Well it has a hole in it now.  It's not the most flattering thing in my closet but it is one of the more functional pieces.  I have a few pieces of cotton voile that could serve the same purpose.


I am wearing a two piece bathing suit under the life jacket.  I bought it when we were on our honeymoon and I felt pretty good about my slimmer body.  The bottoms provide full coverage (I need more than 1" of fabric at the hips to feel comfortable) and up until recently, it held my breasts fairly well.  It's not my favourite bathing suit any more but I thought the two piece bathing suit would be better for the all day adventure.  When we got to Tulum I bent over to rearrange stuff in our bag and felt a snap.  The back clasp broke before we even got 5 feet from the minivan.  Mr. Lina used a hair elastic to tie it back together but it was just not the same (also why my bust looks terrible in the pink shirt above, bad things happen when the band is too loose).  Fortunately we were required to wear life jackets while swimming so I didn't have to worry about it falling off completely.  Now that it's really broken, I'd like to clone it.

Back to tops to clone... 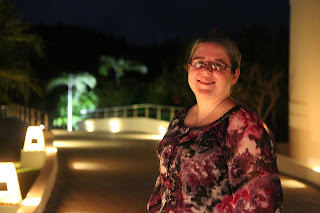 This top was a gift from my MIL at Christmas (Mark's Work Wearhouse).  I also wore it for the screening at the Landshut film festival.  How many tops work in palm trees and snow? 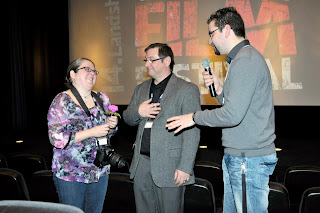 It's sheer and came with a black tank to wear under it.  I love how this moves away from me so I feel pretty regardless of how bloated I feel from Mexican buffet or schnitzel.  It has a silver thread through it so it can look fancy or casual depending on what I pair it with.  I have some sheer fabrics in my stash that I bought for lingerie but I think this might be a better use.  I'm not sure I would ever be attracted to a pattern as shapeless as this, but it actually works in my wardrobe.

Work has been rather crazy for me and having my manager quit won't make it any better.  Mr. Lina has texted me more than once asking if I'm coming home.  It's not all bad, I am feeling good about some recognition I'm getting at work, but it's not leaving a lot of time for things like blogging (pout).  In theory I should write in evenings anyhow, but the 5 hour time difference and thinking all day left my brain a little mushy in the evenings.  Hopefully I'll get to the other two vacation/fabric posts soon.
Posted by Seraphinalina at 22:25 11 comments:

and so little time...

I need to take more pictures to do a proper post but I'll sum it up in a few bullet points for now. 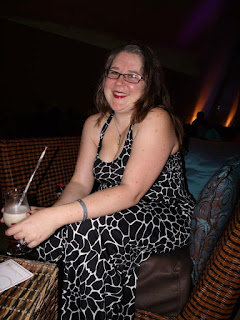 Now to switch gears and prep for a house concert Sunday afternoon (GTA bloggers let me know if you're interested) and then packing for Germany!

We get amazing artists through Home Routes.  One of our previous concerts, Annabelle Chvostek, is nominated for a Juno (the Canadian version of the Grammies) for her album Rise.  So very cool.  But, this week it's The Sweet Lowdown from Victoria BC.

Posted by Seraphinalina at 13:28 4 comments: