Moving has this odd mix of packed and not packed.

You would think what I've packed are things I don't need.

I look around the house and wonder why I didn't pack certain things (although the answer to that might be that they should be pitched).

Email ThisBlogThis!Share to TwitterShare to FacebookShare to Pinterest
Labels: Home

The Good Kind of Change

I've been living in some surreal world the past month.  After so much time of talking and planning and thinking and packing but accomplishing nothing... stuff happened.  Lots of stuff.  Life changing stuff.

And boy it sure feels good.

Every time I tell another friend or coworker about the house selling or the house we will be moving to, I feel a glow.  A smile I can't remove, a sparkle in my eyes and face that hasn't always been there.  A smile that isn't a fake it 'till you make it kind of smile that doesn't reach your eyes.

Building on the changes, yesterday I called Children's Aid in the region we're moving to.  A university friend of mine works there and she discreetly asked her adoption coworkers the best avenue for me to proceed and they recommended calling to let us know we were coming.  It's nothing too formal, but now we're on their radar.

It was a good conversation mostly about us - who we are, where we are at mentally, emotionally, how stable our life is  (well, the move is the definition of lack of stability but past that nothing is changing), what we're looking for, etc.  The application package is in the mail.  I felt like I had a good rapport with the social worker.  Typically the worker who takes your call is assigned your case, I am hoping that is the case because I think it's a good fit.  I am glad we took the PRIDE training already.  I had much better answers to his questions and perspective on the intention of the question than I would have without it.  From his perspective, we are seen as a more attractive potential parent because that step is already done.

It seems like a good time in my life for the song "Happy" to be played damn near everywhere.  I saw this video of it on the weekend and it is so powerful to me.  It's from Deaf Film Camp - Camp Mark Seven - and it's all in American Sign Language with subtitles.  I hope you enjoy it as much as I did.

Posted by Seraphinalina at 10:39 6 comments:

Everything went pretty much as our real estate agent suggested.  We'd list, let people see the house and "accept offers" at 6pm on the Saturday.

Sure enough, we listed Tuesday, 20 or so people came to see the house, and last night 5 people made offers on it.  The offer we took didn't have any conditions so as of 8pm last night, our house is sold.  Enough over listing value to fund most of the basement renovations on the new house.  :)  I must say I like that part.

It's so nice to have that done.  I don't think it could have gone any better.

We've spent the whole day in the house.  I think after spending every night out, eating out every night, it's good to just be in the house and make our own food.  We can enjoy life again until it's time to move in December.

Posted by Seraphinalina at 15:20 8 comments:

The sign is in the lawn and the listing is publicly available on Realtor.ca.  Did you ever think my sewing room would ever look like this? 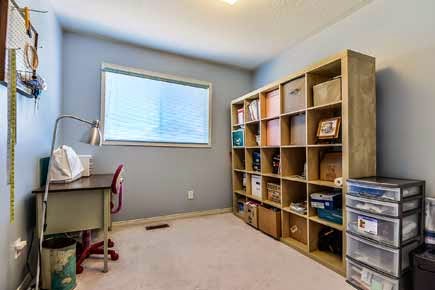 Hard to believe this is the same room...

I didn't think those threads would ever come out of the carpet.  Not to say it's perfect, but it is pretty impressive how few are left.

We've got viewings booked for tonight, so we are off to a good start.  We're going to see Guardians of the Galaxy while they tour the house.  I foresee popcorn for dinner.  :)
Posted by Seraphinalina at 12:26 No comments:

Yep, it's that time of year again, another year has passed. Did you know I started kindergarten on my birthday?  I was so excited, school was going to be awesome.  How much better could a birthday be than starting school?  And then I was told you could bring in a bag of cookies on your birthday.  But it WAS my birthday and I didn't have ANY cookies.

It's okay, we evened things out by taking cookies on the last day of school which happened to be when my youngest brother was born.

I will leave you with the short video that my team mate in Quebec sent me.