Where has April gone?

I didn't want to be a blogger who apologizes for silence, but I seem to be about to do that.  Let's just get on with a list:


So that's what's been going on with me in April.  How about you?
Posted by Seraphinalina at 10:10 No comments:

Email ThisBlogThis!Share to TwitterShare to FacebookShare to Pinterest
Labels: Home

Horrors of the movie/convention sort.  Mr. Lina and I spent the weekend at Shock Stock in London, ON.  They aired Tasha on Friday night, too early for me to make it after work.  The guys got a table at the convention - an opportunity to sell DVD's of The Post Lifers and show off some of the prosthetics used in the various films.  That kind of tied us to the convention hall side of things both Saturday and Sunday.

By "us" I mean Mr. Lina.  I figured there were 3-4 of them there that actually worked on the movies, they didn't really need me at the table so I drifted in and out.  I was mostly there for the socializing in the evening.  It was pretty cool.  I got to know a little more of the film making community that Mr. Lina is connected with.  Quite often I'm introduced to people but don't get to know them, I really enjoyed being able to spend a little more time with those people.

The hotel that the convention used is all suites.  When Mr. Lina sent me the reservation receipt, I looked up the amenities.  French doors to the bedroom, wet bar with fridge and microwave, desk, sofa, comfy chairs in the living room area... perfect for having people over for pre/post-drinks.  As it turned out, we were on the same floor as the VIP party room, and sure enough, we had 5-12 people in our room pretty frequently.

One of the people I had met before but didn't know asked me what my role was in Mr. Lina's film making.  I looked around at the people hanging out, the snacks on the desk, the comfort of people and thought... this.  My role is setting things up so Mr. Lina can do what he needs to, figuring out things that he's going to miss, anticipating what will make others happy and comfortable and easier to work with.  It's not like a few pretzels, hummus, and sweets are all that important, but the next day someone mentioned how it helped soak up a bit of alcohol and I felt oddly vindicated.

The horror community seems to appeal to a particular subset of society, people who seem to take pleasure in proving they don't fit into mainstream society.  So me with my basic make-up, un-pierced body and tattoo-less skin, actually stands out as the odd person in the room.  During one of the socializing sessions in our hotel room, we were talking about a line from The Post Lifers.  The character Katie is a former porn star and spends the whole movie talking about sex.  At one point she gets upset saying don't pigeon hole her, she's read books - but then ruins it all buy saying that pigeon holing is awesome... look it up.  I had not heard of it, the writer thought he was making it up, but it is in urban dictionaries and I did explain it to someone I met on the weekend (ah... ranch dressing as lubricant so it ends up looking like pigeon droppings).  She found it rather amusing to hear such naughty words (I was a bit more direct in person) coming out of my mouth.  Funny how the people who seem to want to prove they don't fit sometimes put the same stereotypes they are fighting on others.

All that socializing came at a sleep debt cost that has made this week... challenging.  I'm feeling like I'm in a bit of a fog.  I am happy to help others out, face to face I'm fine, but finding the interest in my own work is challenging.  It's a very good thing that Easter is approaching and it's a short week.

Posted by Seraphinalina at 14:09 No comments:

Email ThisBlogThis!Share to TwitterShare to FacebookShare to Pinterest
Labels: Movies

The Week of Super Aunt Continues

My brother Scot is now a dad.  Under that little hat is a massive amount of blonde hair. 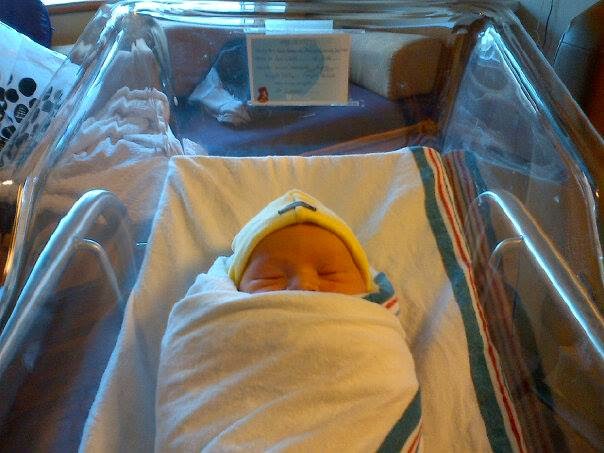 I'm told both baby and mom are doing quite well.  The little guy was born last night so my nephews have birthdays on the 5th and 8th.  I foresee many family birthday parties in early April...

Posted by Seraphinalina at 11:55 4 comments:

Email ThisBlogThis!Share to TwitterShare to FacebookShare to Pinterest
Labels: Family

Welcome to the week of Super Aunt.

You may remember that both of my brothers somehow had partners with synchronized ovulation and ended up with due dates one day apart - April 4th and 5th.  How that happens when they live literally 4,500 km (give or take depending on your route) apart, I'm not sure but it did.

Clone (the youngest of us) arrived in time to have a few days with his wife and my niece before my nephew arrived on Saturday, April 5th.  Both my nephew and my SIL are doing really well, I gather he's a pretty hungry baby and feeding well.  With my cough and congestion, I'm not in a rush to meet him, but he is adorable.

And I just got word that Scot and his fiance are on the way to the hospital.  My mom went to have lunch with his fiance and her mom (who came from Venezuela for the birth) only to find they were off to the hospital because her water broke.  So... more to come on that front.  We know they are having a boy too so I'm going to have a lot of nephew stories.

I'm not quite sure how I'm feeling about all of this.  Being sick is (again) giving me a reason to not join the family fray trying to meet the babies.  I would not wish 2 plus weeks of congestion onto the babies nor the new parents, it's best to keep my distance a little while longer.  While true, I think it also gives me a level of plausible deniability.

I love babies.  I want to hold my nephew (and soon to arrive nephew) so much but there is a cost to holding babies.  I know it's going to make me cry, heck just writing that is making me leaky.  I can't do it when lots of people are around and right now, it seems like it is parent and grandparent time more than aunt time.  I really can't do it with my brothers in laws around.  Being sick is a good reason not to go right now but really, it's an excuse for something I'd be avoiding anyhow.

Soon, but not quite yet.  That feels more honest and I have to be honest with myself about this so I can put on the brave face and lie when I have to.
Posted by Seraphinalina at 12:22 2 comments:

Ah what a trip...  5 days or so in York, UK, one night at the Manchester airport, another 5 days in Landshut, Germany.  I think it was about the right length.  I was sad to leave friends but my lungs had enough of their cats.  I had a great time in Germany but by the last night I was happy to know I'd be in my own bed soon.  I was not happy to have the vacation end exactly, but I was happy to be going home.

The film festival was fantastic.  Again, I can't get over the quality of the films being aired.  I means so much to go to a film festival and enjoy watching almost every single movie.  Think of the last 20 movies you watched, did you actually like them all?  I saw 66 movies between Wednesday and Sunday if I got my count right.  I can think of only a couple that I didn't like, but even then I could find something good about it - maybe the cinematography or the originality of the idea.

Mr. Lina's film was eligible for two awards - a jury prize and a fan award.  The "Lieblingsschocker" was done by polling the audience for each block of films (there were 7 Shock Blocks) and then on Saturday night they aired all 7 of the best of the block and that audience picked their favourite.  Incredibly, Tasha won their block of "Body Horror".  Going into the finals, it was up against (links are to trailers):
Honestly, airing with these films is absolutely amazing.  Here we are making films in our own basements and living rooms, using friends for free/cheap labour and competing with Oscar contenders and narrated by Oscar winners.  It's a little surreal.

Speaking of surreal...  We went again because it was a good festival that lead to some lasting connections for us and gave us a fun place to go for vacation.  Half of success seems to be who you know and building relationships with other film makers and festival organizers is a good thing.  Still... it's a bit strange on the first day to have a photographer from a magazine recognize us.  Outside of having our picture taken last year, we didn't talk to her.  We also found out from German film makers that we're sometimes listed as an example of how successful the festival has become - people come all the way from Canada!  I think we may have even ended up on local television.  We had to "redo" our greetings to the festival organizer because there weren't cameras playing the first time.  It was rather surreal.

Anyhoo... I have come home with a horrible cough and head congestion and naturally a bit of jet lag from the 7 hour time difference.  I went to bed a bit past 8pm last night (I tried to wait for the sun to at least set) and pretty much slept through until I heard Mr. Lina in the shower at 7:20 am.  Apparently I was tired.  I was also very happy to be in my own bed.  For some reason, the hotel we stay in pushes two single beds together and provides two single duvets to sleep under.  It's a lovely hotel, we even got a free upgrade because our reservation was missed, but I find the bed & bedding situation a bit strange.  We don't get to cuddle (and we usually fall asleep spooning) without either feeling too hot (if our duvets overlap), too cold (if there is a gap between the duvets) or like I'm falling between the beds.  It's very... strange.

I'll have more updates to come, I have a skirt to blog about!
Posted by Seraphinalina at 17:27 6 comments: