After more than 20 festivals in 4 countries with 7 wins for Best (Short) Film, The Post Lifers is now available to the world.  I have blabbed on and on about this little movie, and for a short time, you can see it too (without enduring an entire horror/independent film festival).

And without further ado...

Posted by Seraphinalina at 16:47 6 comments:

Email ThisBlogThis!Share to TwitterShare to FacebookShare to Pinterest
Labels: Movies

I did do a fair bit of sewing late in the summer, but I did not do a good job of getting pictures as proof.  So today I seem to be awake (there has been a lack of sleep the past week) and posting at home where I can draw from all the pictures Mr. Lina took.  He's a much better photographer than I am.

I worked on quite a few of Colette Sorbettos.  It seems when I tweak things it didn't quite make it better, just different.  This one is from rayon.  I made a Sencha blouse from this fabric before and while the colours make me happy, it didn't work well with the buttons/snappers I used.  It really wasn't heavy enough to support them.  Sorbetto is a better match, but I could have given myself a little more room at the high bust area. 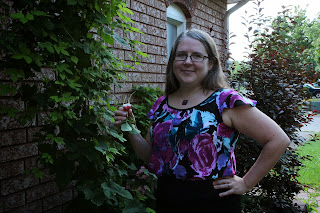 This was taking in July, when our hops plant was growing like crazy.  We ended up with enough hops for a full batch of beer, it turned out quite well.

And the sleeves?  I put the shirt on, pinned where I wanted them to start and stop and the top of my shoulder.  I took those measurements and made a moon sort of shape, but with a straight line where it was going to connect with the arm.  Marking the shoulder point worked well because I did need more coverage to the back than the front but I managed to sew one on the correct way and the other on backwards.  Oops.  I notice it, but it's a matter of millimetres so I don't think it's noticeable to others.

I bought this fabric last summer.  The day I was shopping I was wearing these red capris that I like but struggle to wear.  The fabric really seemed to be the "right red" so I bought it.  In trying to "fix" the arm/high bust tightness, I seem to have gone the other way and if I move the right way you can see a little bra.  Things I like about this... as 100% cotton, it's comfortable but has more structure than the rayon, standing away from me a little which is nice when it's hot.  I was too impatient to finish to go buy new bias tape so I used white (the background is a yellow/cream colour but there is white in it).  I'm not sure that was the best choice. 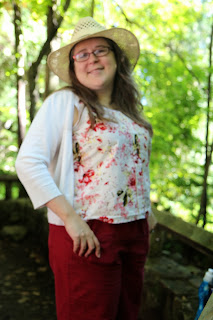 I like wearing it, but it's still far from perfect.  It generally has enough room in the bust, but looking at pictures from Summerfolk where I'm sitting down, maybe not... 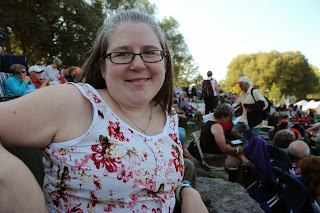 I made a third and I don't have pictures of it, not sure I will.  It's sheer, but in trying to make the arm hole smaller, I went too far.  It's just annoying to wear and I think there is already a thread pull in it.  Pout.

Well, time for me to rustle up some breakfast for us.  I will say it's been fun going through pictures from this summer, it's like feeling sunshine again.

Posted by Seraphinalina at 10:44 2 comments:

Once again, I've had a lapse in blogging.  It's not been intentional, I think I've been too tired to write.  When I do write, I seem to be too close to the events going on and it becomes like reading my day planner.  Not really the look I'm going for, you know?  So a few highlights...

Mr. Lina filmed another Post-Lifer film, "Oh Come All Ye Zombies".  This is going direct to YouTube, hopefully prior to this Christmas.  I did a few things:
From a sewing perspective, all went well.  The shirt fit, Mr.Lina decided to use my (IMO) crappy first yarmulke not the second larger yarmulke (the down side of not being there for the first day of filming), but he seemed happy.  Food was well received, but there were a few glitches from my perspective.  The first being how exhausted it made me to do it.  The problem with craft services is that you're up prior to the first people going into make up (so they can eat breakfast) and I didn't stop moving until the evening.  I was being pushed to have a nap by one of the producers/actors and when I didn't listen to him because dinner had to get in the slow cooker if they wanted to eat before 9pm, he sicced the director on me.  I did have a nap once dinner was in the slow cooker.  Thank heaven I did.  Filming wrapped up at 10pm, it was 2am by the time I was home in my own bed.  Going to work the next day was painful.

The problem with being so busy is that I didn't get pictures of the actress nor Humphrey.  I did ask someone (with a much better camera) to take pictures for me, but it hasn't been shared around yet.  So I'll blog more about that when those arrive.

So I WAS sewing, but since the film shoot, I've just been exhausted.

I'm doing okay.  No sadness, no tears, no wonky emotions, no lamenting about lost opportunities.  I am slowly adjusting to the need to move, the more I say it I suppose the easier it gets, but there are still people I hedge around discussing moving with.  I just don't feel quite that comfortable yet.  We are looking online at houses for sale and saying a few "what if's".  Mr. Lina has priced out a storage unit and we'll be setting that up in the next week so we have a place (other than the fairly full garage) to move things that we don't need in the house.

I've also been emailing a coworker who adopted his daughter through a foster to adopt program in another province.  It's been really good to hear about his experience and how quickly it went for him once they got the ball rolling.  He's also been encouraging not to rush.  He saw couples that went through infertility treatment prior to adoption who were clearly still struggling with closing that door.  It's good advice from someone who has been there.

For those of you who like cooking with a slow cooker and like pork, I highly recommend this recipe.  I roughly followed the recipe, probably less salt and more cayenne, ground cumin instead of seeds... but I didn't significantly change anything except the orange juice.  We don't drink a lot of juice so I don't buy a lot of juice.  I do buy tetra packs of "fun" juices for punches when it's on sale so oddly enough I had mango juice but not orange.  Feedback from the 20 odd people I fed was very positive.  People were going back for thirds.
Posted by Seraphinalina at 11:27 2 comments: