You have to be careful what is said around Mr. Lina.  He remembers things.

Two years ago my youngest brother, Clone, made the mistake of saying that as much as he found the show Hoarders interesting, he got to a point where he couldn't watch it any more.  He also went on a 5 minute rant about snuggies.  Same family event but not the same conversation. 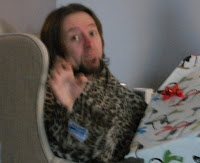 Country Girl Couture has a post about Christmas music that reminded me of the start of these silly gifts.  (Side note, check out all of her "Things that tick me off Thursday" posts, I always find them amusing).

Quite a few years ago, I don't think that Mr. Lina and I were married at this point, Paul McCartney's song "Wonderful Christmastime" came on the radio or store or something.  I think it's one of the worst offenders for being overly cute (I love the Beatles, but damn Paul needs someone like John to tell him when to dial the sappy crap back.)  I told Mr. Lina that my brother Scot HATES that song.  So much he will leave armloads of picked out presents behind and walk out of a store, just so he can escape the song.

He burns that song 13 times on a CD, creates a fake play list on the back and uses Google images for Scot's name to put pictures on the cover calling it "A Very Scot Christmas".

And he giggles to himself with glee.

Scot figured something is up when he opens it up.  Dokken (etc) is not really his taste in music and he couldn't understand why Mr. Lina thinks he would want to listen to any of the music on the play list.  So after the presents are opened, people are checking out their new gifts, he goes to my parents stereo and hits play.

About 4 bars in, he flips the CD over to read the play list again.

4 bars in he hits next.  And hits next sooner and sooner until he looks up and says "So is it on EVERY tract?" as my entire family start laughing.

Next year, Mr. Lina's gift from Scot was wrapped in paper mache.  Silly gifts have circled between my brothers and Mr. Lina since then.  Last year Clone wrapped Scot's gift in bacon.  Nothing crazy happened this year, my SIL actually commented on that.

Little did she (or I) know, this year, Mr. Lina had a surprise for me.

When we were in Manitoba this summer his parents taught us to play Canasta.  It was a new card game to both of us and we played a few times to get the hang of it, pairing with his parents so it wasn't two newbies being ganged up on.  One game, my team won quite soundly, mostly because I had wild card after wild card.  One round I went out before Mr. Lina got into his foot.

That night, as we were going to bed he said to me he knew what he was going to get me for Christmas.  I was surprised, I mean, this was early July and we hadn't done much beyond playing cards and watching the lake property be leveled by a back hoe.  I had no idea what would inspire a Christmas present.

My "non-family Christmas gift" arrived yesterday with multiple decks of cards.  I'm all set to play Canasta by myself.  ;)
Posted by Seraphinalina at 12:58 8 comments:

Email ThisBlogThis!Share to TwitterShare to FacebookShare to Pinterest
Labels: Family

I am struggling lately to find a blogging voice.  I've started a few posts that seem to end up being a laudry list of what I've done and complaining.  I don't like them.  It's good for me to write it out maybe, but you don't need to read that.  So I'm switching to point form for a bit of some good and bad of the holidays thus far:

Posted by Seraphinalina at 10:49 No comments:

Email ThisBlogThis!Share to TwitterShare to FacebookShare to Pinterest
Labels: Rambling

The end of year, end of time with one client and the upcoming holidays have made a shade crazy for me.  The few times I am home, I don't really have the umph to do much.  I am taking a sanity break between projects to say hello so you know I'm still alive.
Okay, back to work.  On the plus side, I only have to work the 27-28 between December 22 to January 2nd.  This craziness will end.
Posted by Seraphinalina at 12:02 No comments:

Email ThisBlogThis!Share to TwitterShare to FacebookShare to Pinterest
Labels: Rambling, Work in progress

I am so tired today.  We had our team Christmas party last night and although it wasn't a late night, it was past midnight by the time I got home.  When the alarm went off this morning, my eyes hurt because I needed more sleep.  I think I hit snooze 4 times.

That said, I am in a good mood.  Here are some things that make me happy today.
So here is a little Jamiroquai, hopefully it cheers up your Friday as it has for me.  Cosmic Girl is my favourite song.  In an interview, Jay Kay talked about this particular video.  They were still working on ideas for the video and the girl he was dating at the time was asking who his "Cosmic Girl" was going to be, kind of hinting it should be her.  To side step that, he made it about his car (he is a petrol head as they say on Top Gear).  The purple Lamborghini is his own car, the crew crashed it once loading it from his home to take it to the location in Spain.  They bought another (keep in mind, only 3 were made like this particular car), it was also damaged with precision drivers.  In parts of the video, there is no front windshield to the car.

Posted by Seraphinalina at 11:13 No comments:

The Post Lifers won best short film at the Blood in the Snow film festival.  All of the films I saw had film makers, directors, actors in the audience, there was a LOT of networking going on.  Facebook was just a flurry of likes and comments last night, Mr. Lina was very happy when I got home from bowling on Tuesday.  That's 4 wins for best short, nominations for best short, best editing and best acting.  I think they are going to need a bigger DVD package when it's time to try to sell it.

A special thank you to Amy at Sew Well.  She held a contest for 10 subscriptions to Zinio, an online magazine provider and I was lucky enough to win one.  If Threads had been an option, it would have been a perfect choice but alas, it is not.  Instead I selected Canadian Geographic.  My first issue arrived yesterday and I'm happy with my choice.

When I was in first year of university, I really didn't have a clue of what I wanted to take.  I was accepted as "Major Undecided".  At least it was honest rather than having something that wasn't going to stick.  When I finally did decide geography was for me, I got a lot of support from my family.  My grandfather bought me a subscription to Canadian Geographic.  I loved it, it was like having some kind of geography cred and sometimes I could talk about issues in class all pro-active keener like.  The last time I saw my Papa was at my convocation from university.  It's a fine memory to hold onto.

I didn't have the money to continue the subscription after he passed away.  I've asked for it for Christmas now and again but no one has taken me up on the suggestion.  So at long last, I have my magazine and happy memories back.  Now to learn about polar bears and beavers...
Posted by Seraphinalina at 11:03 No comments:

I've been pretty quiet here.  Tuesday I had a migraine and after that I've just been either too busy or too tired to think.  So here are the highlights...
I'm going to hop in the bath and go to bed early.  Hopefully that will make tomorrow less painful.
Posted by Seraphinalina at 21:40 2 comments: