I have said from the get to, this is a place to sort out my thoughts.  It's a thought sorting kinda day and I need to write some of this out so I don't forget.  We'll start with sewing but it's going to move over to infertility after that.

I did finish up my pants blocker muslin for the Consultative Dressmaker.  It fit a whole lot better than I would have expected for a first version.  The front is just pinned together here, the pictures I sent Steph are awful so I'm only sharing this one with you.  Lighting in my house is terrible for pictures and a muslin of short pants with my belly showing isn't going to be good even with proper lighting.  I'm looking forward to version two.  Even with the issues on this draft, I can see how the final result will end up better than the pants I presently wear to work and hide with long shirts. 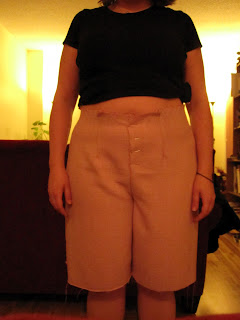 Mr. Lina and I were off to see an immunologist yesterday, the long awaited appointment.  My fertility specialist is frustrated with our lack of success and he wanted me to see Dr Laskin for a second (third) opinion.  He was really great, personable, explained things very well, science enough to be specific without being confusing.  I found it an educational meeting on things I somewhat understood already.  He did actually read my novel of a file from the fertility clinic prior to us arriving so we didn't have to spend time rehashing old news or asking me for numbers I'm probably not going to remember specifically.  So that's the good news, I may not sound as positive after this but it really was overall a good experience.

He feels that it's not my immune system to blame.  My T ratio is elevated, but not enough to explain 6 very short pregnancies.  While he doesn't object to the treatment schedule of my last IVF cycle, he's not convinced that it really makes much of a difference, it's a bit of a Hail Mary using IViG - no harm, but not necessarily helping.

From his perspective, he feels it's one of two things.  Implantation is a very sensitive time, given the number of chemical pregnancies rather than actual miscarriages, it is possible that this is where the problem is.  Embryos are gone before they really get a chance to attach.  There is one pathologist at Yale that does a test on biopsies of the endometrium (yes, they do suck but it's at least quick, this will be my third endobiopsy).  Dr Laskin doesn't feel that this is the best test for implantation issues, but it's the best they have.

The other possibility is genetic issues, potentially spindle issues.  These are more likely to be an issue with my eggs than Mr Lina's sperm, the eggs just play more of a roll in the process of a cell dividing and a spindle issue would result in the cell not dividing properly.  We can do genetic testing to find out if our embryos have issues, but they usually send at least 6 embryos with the hope that enough come back as good embryos and it costs roughly 3-4 times what the FET is going to cost us.  He did say to us this was totally up to us.  As we only have 4 embryos left, it's not really enough to make it worth it.  For a fresh IVF with lots of embryos (he did compliment the quality of our past embryos) he would absolutely recommend it.

If we do go ahead with the FET, then he suggests making a scratch in the uterine lining (sort of like the biopsy, but just one scratch not a few).  There is research (started in Israel apparently) that has shown improved implantation success in doing this.  It's too easy not to do from his perspective.  I'm good with that.

So...  thoughts... if this is genetic, it doesn't matter who is carrying my embryos.  I was not a big fan of using a surrogate, but it's honestly more the ick factor than an educated reason and I can get past ick if that makes sense.  If we do go that route, then genetic testing makes sense because if it's a genetic issue it won't matter.  Past that, I don't think the cost warrants doing it.  I would learn that it was a genetic issue perhaps, but so what?  I'm not doing IVF again so either these work or they don't.  This is something that would have been good 4 years ago, it is too little too late.  I am comfortable with doing the biopsy and getting the test done at Yale.  It is more than just a biopsy because it will need to be done at the right point in my irregular cycle, I'll need to go on meds and go through some ultrasounds to time that appointment right.  So the time bothers me but this is fewer tests than I expected from this appointment so in some ways I'm happy with that.

I guess what just keeps rolling around in my head is that all I want to do is be a mom.  I want someone to care for, I want someone to teach and learn from, I want to grow in my life with children.  I've been ready for that phase for 6 years now.  Marriage is good, but I am not career driven, this is not enough for me in life.  Pregnancy is less and less important to me.

But... Mr. Lina is struggling with the potential of never having a new born baby.  I can't rush him through that, I can't take on any of that grief, I don't have a way to solve that problem.  If he can't deal with not having a small baby, the way that I can't deal with never being a mother, then I don't know what to do.  This is probably what scares me the most at this point.  Coming out of all that news, the odds of success seem even lower than they ever did and I think that's the only way we could have a newborn.

I was completely wrung out by the time we left his office to the point I could not decide if we should face Toronto traffic at 4:30 or go to a pub to wait it out until our parking expired at 6.  Mr. Lina started off by saying it was up to me but after I stood there for a full minute staring at a wall deciding, he changed his vote to the pub.  Then shopping on the way home, after watching Sherlock, Mr. Lina wants a long cashmere/wool coat.  He didn't find one but I bought shoes at the Nine West outlet (I'll have to check the box for the original price but I paid $37 including tax - total score).  Consolation shoes?

In the spirit of all the sew grateful posts out there, this is my 100th post.  I started writing this for myself.  I didn't think anyone would read it and now I seem to have people visiting every day and regular commenters.  I appreciate each of you for making me feel there is someone listening even when I am mostly talking to myself.  It is a wonderful community and I am so pleased to be part of it.  Your support is always felt and I love getting to know you all in return.  Thank you for being a part of my life.
Posted by Seraphinalina at 12:40